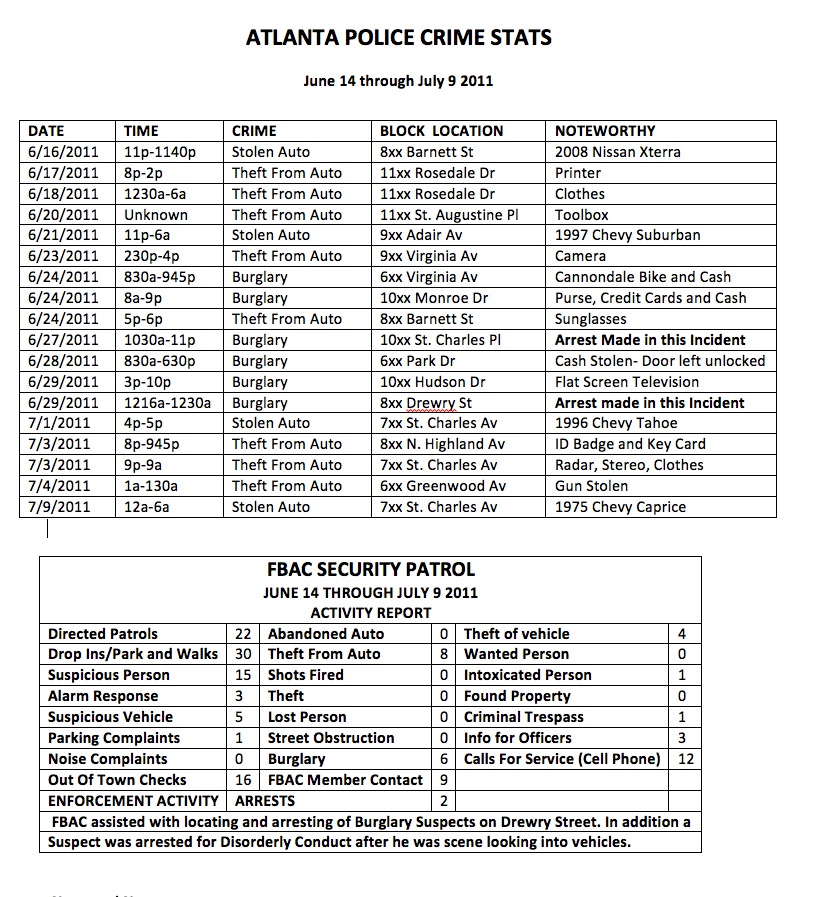 News and Notes from Sgt. Clark
There has been a lot of Criminal Activity in our area and Zone Six throughout the last month.  Patrols have been stepped up along with what the Police Department calls Strong Details which target certain beats to reduce criminal activity through arrests and visibility.

The increase in Burglaries was a concern last month and patrols were stepped up in an effort to combat the problem.  Three Burglars were arrested last month with combined efforts from Zone Six Officers and FBAC Officers.

At 10xx St. Charles Av the Homeowner confronted the Burglary Suspect coming out of a window at his residence.  The suspect fled on foot by was shortly apprehended by Police Officers patrolling the area and arrested.

At 8xx Drewry Street two suspects entered the home and again were confronted by the homeowner, the suspects fled on foot and again were located by Police Officers and arrested.

Also in effort to combat the Burglary issue Officer Gurley, the Zone six Burglary Officer has been heavily patrolling the area.  He located two suspects in our area that were casing vehicles.  Both suspects had outstanding warrants for their arrest.  He believes they are responsible for some of the Vehicle Break Ins and Burglary’s in the area. He arrested the subjects and continues to investigate them in an attempt to link them to some of the crimes in our area.

In an effort to work with our Assistant District Attorneys and get them involved in the neighborhood, FBAC has had the company of Paul Arena-Camarillo riding along with us on patrol, to see for himself the problems we have in our area.  Mr. Camarillo is a veteran Attorney that worked in Los Angeles before coming to the Atlanta Area.  He is interested in working with the officers and community to put criminals behind bars.  He recently got two armed robbers sentenced to 20 years in Prison in the Fulton County system.  He will be riding with us periodically to see for himself the problems our neighborhood faces.  He is very passionate about his job and eager to help our community.  We welcome the assistance from Mr. Camarillo and applaud his efforts to find out what is going on in the Atlanta neighborhoods.

Lastly, just a reminder to everyone not to leave items of value in your automobile.  Recently on the news as you probably have seen, there have been persons casing neighborhoods in Buckhead and Little 5 Points breaking into numerous vehicles.  When I say numerous I mean upwards of 40 break-ins at a time.  Help yourself not to become a victim of a crime and remove valuables from your vehicle.