Apologies for the delay in this report. I have been awaiting the report for week 27, which did not arrive until July 16th.

Some of you may have read about the attempted burglary on St. Charles via our Nextdoor social network. On July 13th around 5:15pm a man broke a basement window and tried to steal a bicycle. What he didn’t realize is that the basement door required a key to open it from the inside as well as the outside. As a result, he was unable to exit the basement with the bicycle. His second mistake? He broken in while the resident was home. When she heard him in the basement she immediately called police. APD arrived promptly and took Raymond Rately into custody. Thanks to Officer Green of APD who responded and handled the arrest.
Rately is 30+ year old man who has been in and out of trouble at least since he was 18 years old, with numerous drug and alcohol arrests. Because this individual is a repeat offender and was bold enough to break into an occupied home our Fulton County Zone 6 Prosecutor, Keith Lamar, has agreed to handle this case personally once the suspect is indicted. Indictment will take three to four weeks. As a CourtWatch case we will be looking for volunteers to attend any hearings if requested by the CourtWatch Coordinator.

WSB TV is reporting an increase in Auto Theft throughout the city of Atlanta. See the story they reported here this link.
To put this story in perspective, there were fifteen vehicles reported stolen or that someone attempted to steal citywide in week 26, and seventeen in week 27. None were stolen from Virginia Highland during those two weeks, but seventeen of the thirty-two were in beats 602, 603, and 604 (Poncey Highland, Inman Park, O4W, and Sweet Auburn).
We should note that crime rates in general were extraordinarily low for 2014 compared to 2012 and 2013. Police have indicated that while their goals are to maintain those low crime rates through 2015, it is a very difficult challenge. While the recent spike of auto thefts in nearby neighborhoods is cause for concern, the numbers for April and May 2015 are well below the auto theft numbers for April and May in 2013 and 2012.
Anyone who would like to peruse the numbers can find the APD Uniform Crime Reports going back to 2009 at this web location.. 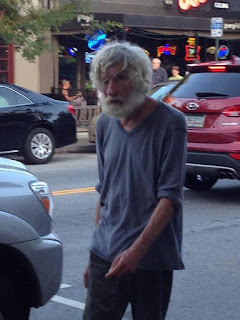 This photograph was taken by David Eckoff last August when there were many complaints about this individual exhibiting bizarre behavior, yelling at people and inanimate objects, etc. After an incident where the man was abusive to a police officer, he disappeared for a time.
However, in the past few days there have been new reports of him in the neighborhood, including acts of vandalism on private property and more bizarre behavior in front of neighborhood restaurants, etc. If you encounter him, please do not confront him, but do call police if you see strange behavior or if you feel threatened. If you can not view the photograph, try this link.
Also a resident provided this video of the man vandalizing his property. Warning, this tape has some profanity at the beginning. Avoid this by fast forwarding to time stamp 0:37. You will note that the man’s hair and beard are shorter, as would be expected if he has been incarcerated recently. However, we believe it is in fact the same person.

Police in the Park

On a lighter note, police will be at Rosa L. Burney Park on Sunday July 19th from 2-4 PM. Meet Officers, enjoy refreshments and kid’s activities and get to know another neighborhood in the city. Rosa L. Burney Park is in the Mechanicsville neighborhood, once home to the Rich family of department store fame.
Want to stay up-to-date on what is happening with APD? Follow them on Facebook, and see an interesting interview by WSB TV’s Jocelyn Dorsey with Chief Turner.

The following information is taken from our APD Zone 6 report (http://atlantapd.org/Zone6.aspx).
It includes information from the Virginia-Highland Beat 601 reported incidents along with relevant reports from other nearby beats. Keep in mind that not all incidents are reported. A map showing the location of beats 601 – 612 within Zone 6 can be found at this link http://boundaries.atlantapd.org/Map-Zone6-Beats.aspx. This information is not shared to scare anyone, but to let you know what happens around us every day so you can be alert and aware.

Homicide None reported on beat 601. One murder was reported in the Zone. This occurred on Confederate Avenue which is on the northern border of the Boulevard Heights neighborhood. The shooting occurred in the overnight hours of July 3rd.

Residential Robbery None in beat 601. In Cabbagetown around 3:00 am a man who was expecting a pizza delivery opened his front door to a robber. His wallet was taken but the resident was not injured. The simple use of a peephole could have prevented this crime. Always know who is on the other side of the door before you open or even unlock it.

Pedestrian Robbery None reported in beat 601. Throughout the zone there were five pedestrian robberies and one attempted robbery with no serious injuries. One of these serves as a reminder to be aware of your surroundings at all times. On June 30th in the overnight hours the victim was making a purchase at the BP on Moreland Avenue in Little Five Points. The suspect bumped into him, grabbed his debit card and ran.

Commercial Robbery None reported in beat 601. The Happy Donut in East Atlanta was robbed and the clerk was beaten. Also, at the Publix on Ponce de Leon Ave., Aaron Matthew Dunsen was arrested for shoplifting four cases of beer and for battery after fighting with the security guard. As it happens, Mr. Dunsen had an outstanding warrant in Dekalb County so he was transferred to Dekalb County Jail.

Aggravated Assault None reported in beat 601. One incident stands out in Beat 609 (Edgewood). The report states that an off duty officer was traveling northbound on Moreland when a man began waving his hands out the window to get her attention. The man then pointed a gun at her and made motions as if to shoot. The officer used her radio to call for back-up and when the suspect was stopped a fully loaded Glock 17 was recovered from his vehicle. Obviously the individual (Ryan Santos) was arrested. Of all the cars on all the roads, only this guy had the bad luck to pick on a cop! Fortunately no shots were fired and no one was injured.

Commercial Burglary None in beat 601.

Residential Burglary One reported in beat 601. An apartment was burglarized and entry was presumably made using a key that was left under the front door mat. An individual known to the victim is suspected.Key safes that can be purchased for as little as twenty dollars and mounted in an inconspicuous location outside your home. Please don’t routinely leave house keys available and unsecured.
Nearby in Poncey Highland and Old Fourth Ward two residences were entered. Also in Old Fourth Ward a back window was left open and a resident arrived home to find the burglar in his living room. The victim immediately left the house and called police while the burglar made his escape the way he came in. Please make sure doors and windows are secured when leaving your residence. You never know what you might come home to find.

Larceny From Vehicle Twelve reported in beat 601. During this two week period there were again multiple incidents in beat 601 including the theft of two more handguns! Thefts occurred from vehicles parked on Amsterdam, Greenwood, Barnett, Virginia Ave, Los Angeles, N. Highland, Ponce de Leon Ave., and Ponce de Leon Place. Cars were entered via broken windows, and unlocked vehicles. In addition to the two handguns thieves made off with the usual haul of laptops, backpacks, cash, and credit cards.
Nearby there were nine thefts in Inman Park, five in Poncey Highland, and a whopping forty in Old Fourth Ward.
On Boulevard during the overnight hours the victim went to visit a friend and when he returned his car was sitting on bricks. All four tires and rims had been stolen. I thought that only happened on bad television shows, but apparently there are some nearby addresses where you really can’t leave a car with nice wheels late at night. A similar incident was reported to us by the neighborhood patrol in LaVista Park on July 13th.
Throughout the zone there were 105 larcenies from Vehicle reported. Please help to spread the word to locals and visitors that they must not leave anything of value in their vehicle, especially a handgun that is not well secured. Under the seat, in the console, or in the glove box is not the place for a firearm in an unattended vehicle.

Other Larcenies Four reported in beat 601. An unsecured bicycle was stolen from Barnett St., and a computer was taken from an office on Pylant Street. At the Open Door Community on Ponce a worker had a Nikon camera, lenses, and camera bag stolen. And finally a repair person left a door open on a residence at The Carlton (off Ponce de Leon) and a laptop and check book were taken.

Auto Theft None in beat 601, but nearby at the Carter Center a vehicle was stolen from the parking lot during the daytime, along with the other thefts noted above. Zone 6 is definitely being targeted for Auto Theft at this time so please take precautions about where you park. Look for well-lit areas with regular pedestrian and/or vehicular traffic.