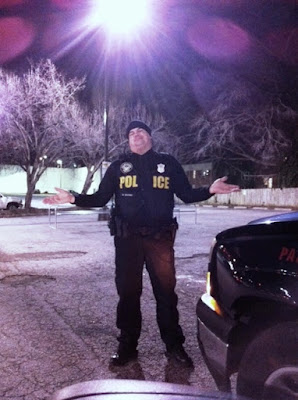 In our continuing series of interviews with the officers of FBAC we recently learned more about our own Officer Matt Gilstrap. Many of you will remember that Officer Gilstrap was injured while on patrol with The Virginia Highland Security Patrol/FBAC in May.

Fortunately Officer Gilstrap was able to get the situation under control and the two were arrested and charged. We are delighted to report that he is now back on the patrol. For a couple of years he filled in on a temporary basis, but is now working for us regularly.

Matt grew up in Flowery Branch, Georgia, a small town north of Buford, and he graduated from West Hall High School in 1996. He then completed a Bachelor of Science degree in Civil Engineering from Southern Polytechnic State University (now a part of Kennesaw State). Note that Matt is not claiming KSU as his alma mater!

He worked for about two years as a design engineer primarily on civil and structural projects, and as he relates it, “hated every minute of it.” He tells us that being “stuck behind a desk all day every day was not for me.” As a change of pace he spent six years working in the field of pipeline construction, before deciding to become a police officer. He has now been on the force for a little over four years.

Officer Gilstrap says that, without a doubt the people he works with are the best part of his job. Even though the members of the specialized unit he is assigned to are all very different, it doesn’t matter. They are all focused on the same goal – to go out and find the bad guys and put them in jail.

When asked for a safety tip, Matt shared his thoughts about situational awareness. He says that, “it is very easy to become overly focused on your phone or something else. If you stay alert, and keep you head on a swivel, not only will you possibly spot trouble early enough to avoid it, but you also send a message to would be criminals. They notice this, and will probably find a softer target.”

Outside of work Matt has been married to his wife, Maggie, for eleven years and they have a wonderful seven year old daughter named Clair. Mac, a yellow lab and a certifiably crazy cat named Izzy round out the family. If he wasn’t a police officer he shared that he would be a machinist/fabricator as he loves metalworking and fixing things.

He sure is helping us to fix things here in Virginia Highland as he works to keep us all safe and the bad guys off the streets. In fact, in addition to the good results he has had with APD, the first month he was back on FBAC Patrol he made and arrest on a parole violation here in the neighborhood. Well done Officer Gilstrap!
Posted by Kay Stephenson