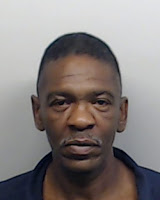 Troy Barber is an individual currently wanted by APD Zone 5 for a residential burglary. He is also a suspect in a Cabbagetown burglary. Records indicate he is a 52 year old black male, 6’4” tall and weighing 257 pounds. He has a long record in the state prison system going back to 1984. Indications are that he is on foot so he could turn up in any nearby neighborhoods. He has been spotted a few times in the past few days, but has not yet been apprehended. If you see this man, do not confront him. Call 911 immediately and give them a description of what he is wearing and which direction he is headed. If you cannot see the embedded photograph, you can view a photograph here https://virginia-highland.nextdoor.com/news_feed/?post=23658455

From APD Press Release: As part of its participation in the White House’s Police Data Initiative, the Atlanta Police Department will begin using Nextdoor (www.nextdoor.com), the private social network for neighborhoods, to poll residents in Atlanta.

The Atlanta Police Department has been using Nextdoor since April 2014 to better connect with residents and is one of the first public safety agencies in the country to gain access to Nextdoor Polls. Nextdoor Polls will enable verified residents in Atlanta to provide feedback on specific programs and overall sentiment directly to the department in an open and transparent way.

“Having the ability to easily communicate with residents is imperative to our continued community policing efforts and will add another layer of transparency between the Atlanta Police Department and our community,” said Chief George N. Turner. “With Nextdoor Polls, we can connect directly with residents, gather their input, and work together to make Atlanta an even better place to call home.”

In an effort to support our native pollinators, “bee hotels” have recently been installed along the BeltLine. Please leave these installations alone as the bees should not be disturbed, but be aware that they are there to help with pollination of the native plants along the trail.

There are also several upcoming meetings of interest.

April 21st from 6:39 – 8:00 pm at Our Lady of Lourdes Catholic Church (25 Boulevard NE) attend the Northeast study group meeting listening session. This will be the first of five meetings for the BeltLine staff to hear your feedback.

Follow the link to read Council rep Alex Wan’s latest newsletter. Participate in the Resident Satisfaction Survey people. My rule is you don't get to complain if you don't participate, so tell the Mayor what you really think!
http://us1.campaign-archive1.com/?u=215ca7783ad1daaebde983b03&id=4f10ae7f3b&e=8dfa71cd64

Do you want to learn what CourtWatch is all about? Now is your chance. April 30th is the date for the annual training session. Even if you can't regularly attend court hearings, you can help in other ways, so please get involved. Follow the link for more information.
https://www.facebook.com/events/508627599344145/

Save the date Saturday September 30th. Volunteers will be staffing tables at the Virginia/N. Highland Triangle and at Intown Ace Hardware with information about how to improve house number signage. Having signage on your home that makes it easy for first responders to get to you quickly is so important. Volunteers will have samples of house sign options available through our own Intown Ace hardware store or VHCA. More information coming about times, etc.

The following information is taken from our APD Zone 6 report (http://atlantapd.org/Zone6.aspx).
It includes information from the Virginia-Highland Beat 601 reported incidents along with relevant reports from other nearby beats. Keep in mind that not all incidents are reported. A map showing the location of beats 601 – 612 within Zone 6 can be found at this link http://boundaries.atlantapd.org/Map-Zone6-Beats.aspx.

This information is not shared to scare anyone, but to let you know what happens around us every day so you can be alert and aware.

Homicide None reported in Beat 601 and none in Zone 6.

Rape None reported in Beat 601 and none in Zone 6.

On March 16th near 1020 Vance Avenue a suspect tried to choke the victim in his car after a road rage incident. The victim was able to take a picture of the suspect’s vehicle tag which came back to a residence two blocks away. The suspect was found and arrested.

On March 9th during the daytime a residence at 1040 Greenwood Avenue was entered via an opened back window. A Macbook Pro and jewelry were taken.

On march 5th during the overnight hours the front glass and burglar bars where broken at 301 Rosemont on N. Highland Avenue. Clothing, cash, and the cash register drawer were taken.

On March 9th during the overnight hours the front glass doors of the pizza restaurant at 730 Barnett was entered via broken glass doors. The cash register was taken.

On March 2nd a package was taken from a home on Elmwood Drive.

On March 12th seat cushions were taken from a porch on St. Charles Place.

On March 9th a vehicle was stolen from Virginia Avenue
If this report was forwarded to you and you would like to be added to the distribution, please send a message to me at VaHiSafety@gmail.com with your name, email address, and affiliation. Thanks.