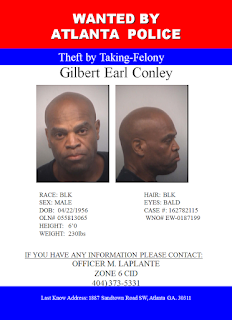 One of our APD Detectives has asked that we keep a lookout for Gilbert Earl Conley. He is suspected of multiple high-end bike thefts, and has been targeting Ponce City Market, Inman Park, Emory University and Decatur areas. A flyer with more information and photograph is attached. If you see him please call 911 and provide as much information as you can, including what he is wearing, where you see him, and which direction he is headed.

Lt. Floyd from Atlanta Police Department attend the VHCA meeting on Monday October 16th and spoke with us about crime in the area. A common crime at this time of year is the advertisement of items for s
ale on websites like Craig’s List. When the customer shows up to purchase the item, they are r
obbed.

He recommends that if you do want to buy something you see on an online website, only agree if you can conduct the transaction at the Zone 6 Precinct. The address is 2015 Hosea L Williams Drive. Police are happy to allow you to use this location, and if someone is unwilling to meet there, it is probably a good idea not to go forward with the purchase.

Once again Zone 6 is collecting new unwrapped toys for children ages infant to fourteen. This year they hope to provide a happy holiday for 100 children, so your generosity is needed.

No need to drive down to the precinct. Just drop you toys off on John Wolfinger’s front porch at 1054 Vance Avenue. As soon as he collects a car load he delivers for the whole neighborhood.

Toys will be accepted up until December 14th for the party that takes place on the 17th, but why wait? Get your shopping done early so that our friends at Atlanta Police Department know they won’t have to disappoint any deserving child this year.

As the holidays are approaching fast, we want to make sure that all citizens are keeping safe, and doing all they can to reduce criminal activity.  The following two videos have simple tips to help keep vehicles from being broken into.

Please know that the new feature is NOT a tool to report emergencies or file an official crime report. Please continue to call 9-1-1 to report crime and suspicious activity.

You can learn more about forwarding crime and safety messages to APD by clicking on this link, (https://help.nextdoor.com/customer/en/po...)

As always, APD cannot view any content that you do not choose to directly forward to the Atlanta Police Department. We cannot see the posts and replies that are made in your neighborhood.

If you have any questions, please contact me directly at sdforte@atlantaga.gov or 404-546-2530.
Thank you for your partnership in making Atlanta safer.

The Atlanta Police Department is scheduled for an on-site assessment as part of a program to achieve accreditation by verifying it meets professional standards.

As part of the on-site assessment, agency employees and members of the community are invited to offer comments at a public information session on Tuesday December 6, 2016, at 6:00 pm. The session will be conducted in the City Council Chambers located at City Hall, 55 Trinity Avenue, SW, Atlanta Georgia 30303

You may also offer comments by calling 478-550-0512 on December 6, 2016, between the hours of 2:00 pm and 4:00 pm.  Comments will be taken by the Assessment Team.
Telephone comments as well as appearances at the public information session are limited to 10 minutes and must address the agency’s ability to comply with CALEA’s standards.  A copy of the Standards is available at the Public Safety Headquarters, 226 Peachtree Street, SW, Atlanta, Georgia 30303.  Local contact is Lieutenant M. Ablan, 404-546-2632.

Anyone wishing to submit written comments about the Atlanta Police Department’s ability to comply with the standards for accreditation may send them to the Commission on Accreditation for Law Enforcement, Inc. (CALEA), 13575 Heathcote Boulevard, Suite 320, Gainesville, Virginia, 22030-2215 or www.calea.org

The following information is taken from our APD Zone 6 report (http://atlantapd.org/Zone6.aspx).
It includes information from the Virginia-Highland Beat 601 reported incidents along with relevant reports from other nearby beats. Keep in mind that not all incidents are reported.

A map showing the location of beats 601 – 612 within Zone 6 can be found at this link http://boundaries.atlantapd.org/Map-Zone6-Beats.aspx.

This information is not shared to scare anyone, but to let you know what happens around us every day so you can be alert and aware.

Pedestrian/Carjacking Robbery None in Beat 601 and twenty in Zone 6.

Residential Robbery None in Beat 601 and one in Zone 6.

Commercial Robbery None in Beat 601 and four in Zone 6.

Aggravated Assault One in Beat 601 and eight in Zone 6.
On October 18th during the evening, a waitperson at Fontaine’s was confronted by a person who came in off the street and began yelling. With the victim asked the man to leave, the man threw a hot cup of coffee on the victim. The suspect left but was spotted around the corner and was arrested. The arrestee was 59 year old Curtis Kidd.

Residential Burglary None in Beat 601 and twenty-eight in Zone 6.

Commercial Burglary One in Beat 601 and five in Zone 6.

On October 29th computer and video equipment was stolen from Good Works Loft offices on Pylant while the business was closed. It appears that the rear window was pried open and the front door kicked in.

Larceny From Vehicle Ten (total of 13 vehicles) in Beat 601 and one hundred and seventeen in Zone 6.

Entry was made via broken windows, damaged door locks, and from the open bed of a pick-up truck.

Other Larcenies Six in Beat 601 and fifty-seven in Zone 6.

On October 16th cash was taken from the tip box at The Local.

On October 17th a mountain bike was stolen which had been locked up on a balcony.

On October 24th a scooter was stolen from Frederica and found by someone at Freedom Park & North Ave. This was reported to the owner via email. However, before the owner could go to the scene and reclaim the scooter it was taken again.

On October 25th a Samsung tablet was stolen from Cantoni on Monroe.

On October 29th a bicycle was stolen from a car parked on Frederica. The bicycle was not secured in the vehicle.

Also on October 29th the lock was broken off a community mail box at a complex on Greenwood. A package was stolen and the empty packaging was found by the victim.
Please note the two bike thefts. We don’t know that these thefts are connected to Gilbert Earl Conley who is being sought by police. However, we do believe that he may be operating in our area. If possible, please try to secure bicycles inside your residence.

Auto Theft None in Beat 601 and twenty-seven in Zone 6.